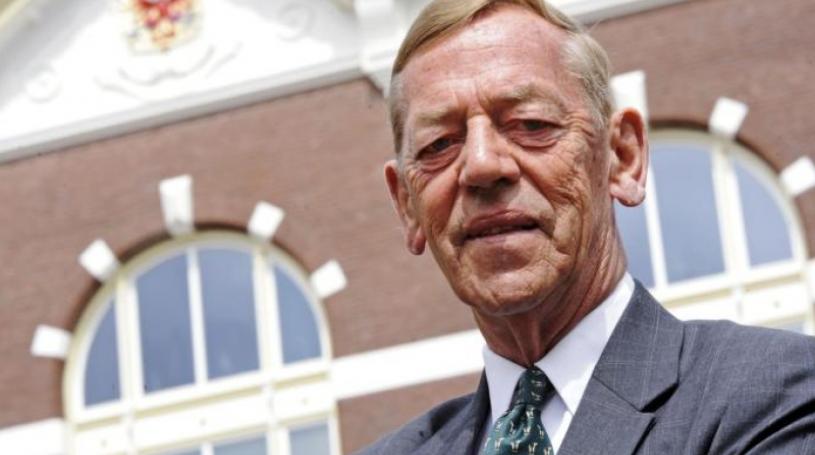 The Board of the Netherlands Hong Kong Business Association was saddened to learn that one of its most loyal and exceptional members, Mr Joop Litmaath, Knight in the Order of Orange Nassau, passed away in The Hague on 27th June at the age of 87.

A very private family funeral was held early July, after which he was laid to rest in beautiful and tranquil St. Petrus Banden in The Hague, not far from the tennis grounds where he used to play.

Joop, born Joannes Bonifacius Maria Litmaath on 10 April 1934 in Leeuwarden, was in every aspect a remarkable man and memorable man.

In his autobiography "Far East of Amsterdam", published in 2003, and in the updated version "The Flying Dutchman of Hong Kong", published in 2006, he writes about his life and work in Hong Kong, the city where he arrived as a young, single, employee of the Dutch trading company Hagemeyer in 1963.

Joop and his wife Iris van Bronckhorst, whom he married in Hong Kong in August 1963, quickly made Hong Kong their home. The city also became the base for his business success. Not only did Joop run his own successful companies, he also joined the boards of numerous clubs, organisations, foundations and chambers including the Hong Kong General Chamber of Commerce, the Dutch Business Association, the Rotary Club Hong Kong, the Hong Kong Country Club and more. In his spare time he joined the Victoria Jazz Band, and later founded the Hong Kong City Jazz Band.

Over the years, Joop met and befriended people of all walks of life in Hong Kong. From Governors and Tycoons to enthousiastic sea scouts and prisoners wishing to start a new future. Joop was known as a friend and mentor to many. His books certainly offer the readers an interesting insight into a great many details of Hong Kong life over the course of five decades.

Joop and Iris moved back to the Netherlands after more than 50 years in Hong Kong, settling into a home near the beaches of Scheveningen. There he continued to play tennis, bridge and jazz and he also joined the Netherlands Hong Kong Society - which had already invited him as a visiting guest speaker on several occasions in the past - as a personal member.

In 2017 the board of the NHKBA asked Joop to join a special advisory committee to smoothen the merger of the Netherlands Hong Kong Society and the Hong Kong Chamber of Commerce in the Netherlands. A task he fulfilled with enthousiasm and wisdom.

Whenever possible and until 2020, Joop and Iris attended events of the NHKBA in the company of his life-long friends Robert Kalkoene and Victor Rauwerda.

The Board of the Netherlands Hong Kong Business Association offer their condolences to Mrs Litmaath and their daughters and family.

We will miss his ever fascinating talks, his impromptu performances on the grand piano of the Nieuwe of Litteraire Sociëteit De Witte in The Hague after the Chinese New Year Receptions and his bigger than life personality.

When social distancing circumstances permit, a Memorial Mass will be held in The Hague, possibly followed by a Jazz-gathering in Joop's characteristic style. Likely in the Autumn.

If you would like to write to the family and/or receive future details can send a message to joop.litmaath@gmail.com.